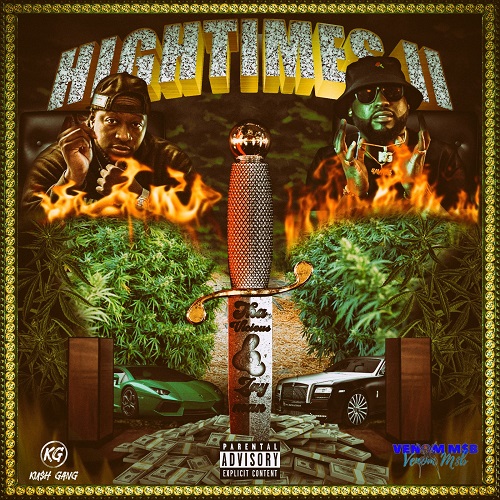 Tha Vicious & Zayman are back repping Broward county and bringing Hightimes vibes. The duo are like Cheech and Chong providing seriously dope beats and minor comical humor. Hightimes 2 opens up with Mailman the lead track which recently has had a video released. Tha Vicious and Zayman are bringing Method man and Redman vibes this EP is truly a stoners dream. Zayman take solo route on second track only fans . Then we are graced with the third track ace from the duo. Tha vicious gives us remarkable trap sounds on Gucci Flow. Then the Ep concludes with making plays.

[New EP] Teddy Rose – The Pleasure is Mine | @teddyroselife

Pop music has a new face and it belongs to South, FL self-proclaimed “Pop Princess,” Maxkaella. Returning to the scene with a fire new EP titled MKSZN this Florida native is on her way to the top musically. She served up an impressive body of work that listeners worldwide can tap into and relate to.

Released on June 11th, Maxkaella celebrated the release of her new ep “MKSZN,” in Miami, FL surrounded by family and friends at a private event. The event was produced by event planner and reality tv star Cree, the founder of Inspire Agency. To kick off the night, guests were greeted with savory appetizers like chicken and waffles, sounds by Dj Bankz, and an open bar featuring Uncle Nearest Whiskey.

Mk Szn is an artistic expression of Maxkaella “owning her independence away from those who tried to dictate her future. MK SZN represents a growth season of letting go, moving on, and living ones best life with no regard.

Be on the lookout for this budding popstar. Maxkaella is excited to continue to showcase her talent through her artistry, release new visuals, and show the world a new side to pop music.

Click here to listen to one of the singles that appears on MK SZN titled “It’s Giving” from rising Florida superstar Maxkaella. She will be a household name in no time. Tap in with her on Instagram @maxkaella.
Post Views: 84

Based out of New England, Meader reigns in a class of his own along with his clever lyricism and quick-witted punchlines that all tell his story from beginning to end. With no track the same in flow, deliverance, or sound, the 6-track project embodies Meader’s past, a look inside his mind, and where he’s going. Meader displays diverse flows and vocal deliverance in each track which is sure to entice listeners in.

Simon Says begins the EP where Meader goes into vivid detail about the voices in his head and how they operate as a private movie screening. Although he can be consumed with crazy thoughts that don’t make him insane…he’s simply indifferent.

An intro of piano keys in Subsequent steers the track for Meader to come in and unleash his beastly ways, no filter. He lays in on cheesy rappers who rap about guns, violence, and the streets when in actuality they are home with mommy and daddy washing dishes. Lil Sheff Dis piggybacks that theme with Meader delivering a true, in-your-face dis track…no soft punches.

Loose-Leaf can be noted as one of the top tracks off the EP. Meader describes himself and his stance in the music industry. By choice, he’s not part of mainstream or labels, rather, he’s coming through your boom box…independently. Unmatched in style and all-around package, Meader paves his own lane.

In Mind-Vault, Meader truly invites the listeners into past pain, scars, and unread messages in his heart. With a choice to become a victim or move forward, Meader decides to brush it off, walk alone, and right his wrongs.

Summit is the EP’s finale and the point where Meade exhales success. After skipping death, he’s now turning the pages and racing towards sunshine…beast mode style of course.

Overall, Meader delivers an honest and relatable project with diverse tones and cadences that both heighten his raw emotion and intensify his very personal messages. Stream/download ‘Presque Vu’ below and connect with Meader on Twitter @meader.