Native Harlemite Neal Shoemaker, started Harlem Heritage Tours in 1998, after realizing the opportunity that tourism offers Harlem to preserve its culture and contribute to the development of the local economy. All tours and events are conducted by those who were actually born and raised in Harlem. When we started Harlem Heritage Tours twenty years ago, many thought that visitors would be reluctant to visit the community. But to our pleasant surprise, realized that the public was thirsty for authentic experiences presented via the eyes of those who are actually from Harlem.

Customers have expressed to us that they want the heritage of Harlem to come alive.
Working with community partners, such as the Schomburg Center for Research in Black Culture, and the Apollo Theater, Harlem Heritage Tours have developed a series of multimedia bus / walking tours that present archival video and sound at the very sight where history happened – this method keeps the human touch while bringing the past to life – this is a first in the industry.

Across the planet individuals and organizations are exploring ways to incorporate community involvement into the design and development of tourism products and services. The goal is to respect the privacy and integrity of those who live and work in Harlem, and at the same time expose visitors to all that makes Harlem special. Because of our sensitivity, we receive more support from grass roots Harlem than any other tourism company in the community.

Over the past ten years we have met people from all over the world and we feel that tourism is a great tool to promote positive domestic relationships and heightened foreign diplomacy.

We look forward to another exciting twenty years in the business and look forward to seeing you in Harlem soon. Mr. Shoemaker can be reached at email: loveharlem@aol.com and www.harlemheritage.com

National radio host Ryan Verneuille and artist Luciana Pampalone joined forces this holiday season to spread some Christmas cheer to those less fortunate in the Hamptons. On December 18th the two public figures hosted “The Hamptons Holiday Hoedown” via Zoom to benefit the “Heart of the Hamptons” organization, which provides the Southampton Food Pantry and financial assistance programs to families in need. Having been born and raised in Sag Harbor, it came to no surprise just how much this cause means to Verneuille.

“Anyone that grew up in the Hamptons understands the struggle of the working class on the East End of Long Island. I figured this would be a perfect time in history to use our platform to help solve an issue affecting people in the hometown.” Verneuille says. “We wish we could have held a live event to attract a larger audience and in turn more donations and attention to this cause but trust me when I say that Luciana and I are pulling out all the stops to make this as special and successful as possible.” Verneuille added, “5 years ago, I started my radio show in the Hamptons, and using what we have worked so hard to build, we can finally help give something back to this great community.”

The event will air on national radio at various times (check theryanshow.net/affiliate-stations for full schedule).  If you would like to make a difference and donate to this wonderful cause there’s still time, click this link https://theryanshow.net/hamptons-holiday-hoedown. 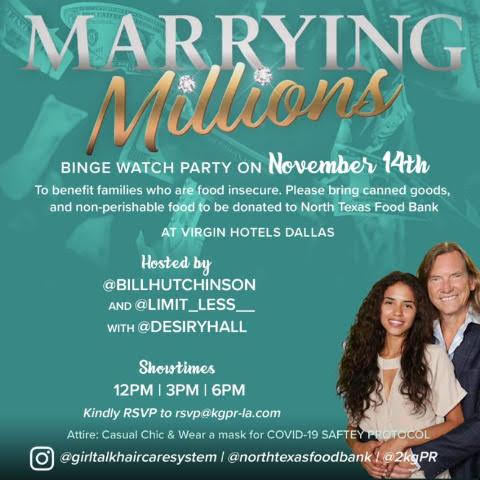 Watch Party event will be hosted by Desiry Hall, Bill Hutchinson, & Brianna Ramirez of Lifetime TV’s hit series Marrying Millions Get ready Dallas,Texas 11/14/2020 This event is to benefit families who are food insecure. Please bring canned goods & non-perishable food items to be donated to north texas food bank Our gratitude for your time & support. The watch party, 12N-9P/12N-1P guests green carpet arrivals Virgin Hotels Dallas, Texas RSVP: rsvp@kgPR-LA.com Five new couples join the series with returning favorites Bill and Brianna from Dallas and Gentille and Brian from Las Vegas. From the creators of 90 Day Fiancé, Marrying Millions follows relationships where one partner is incredibly wealthy and the other is definitively not, leading the couple to face intense scrutiny from family and friends and questions about whether it’s true love…or true love of the money and lavish lifestyles. While these love stories may sound like modern-day fairytales, they are not without major challenges as the couples must try to bridge their vast differences and fit into each other’s worlds. 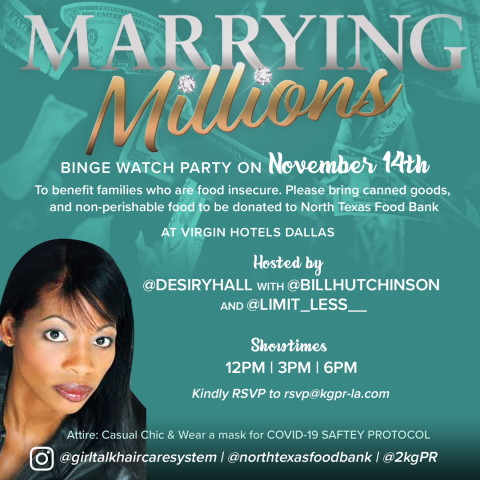 home  “This song had to be made to become proactive in shaping our collective future, because the rebellion that happened...