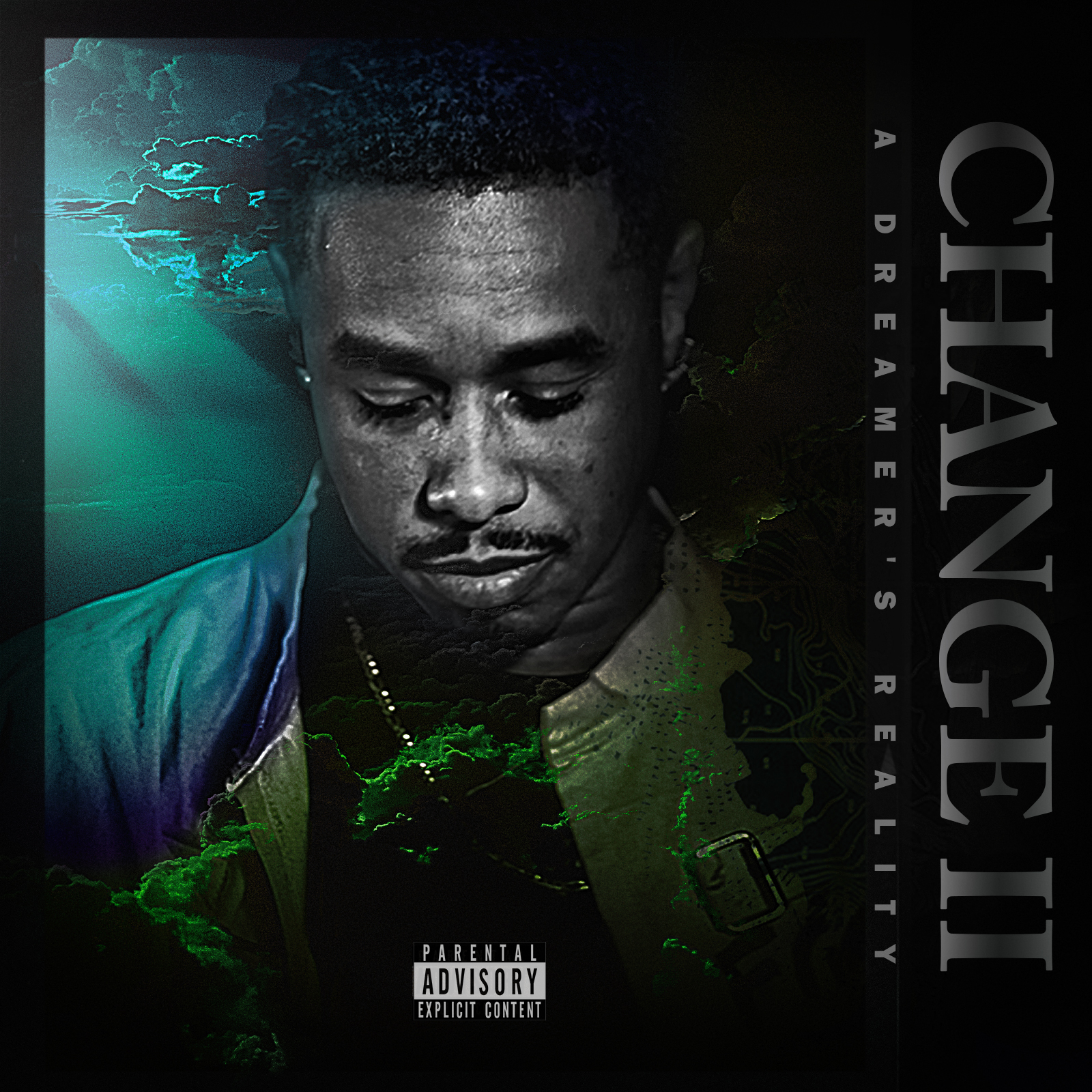 Bank is known for bridging a generational gap in Hip Hop with captivating blends of classic and innovative melodies along with his signature punchlines and wordplay. It’s fair to say that ‘Change II: A Dreamer’s Reality’ exceeds that notoriety. Bank invites listeners into a blatantly honest world from beginning to end. This lyrical autobiography is tangibly soul-gripping and sure to go down as a timeless gem in Hip Hop books. 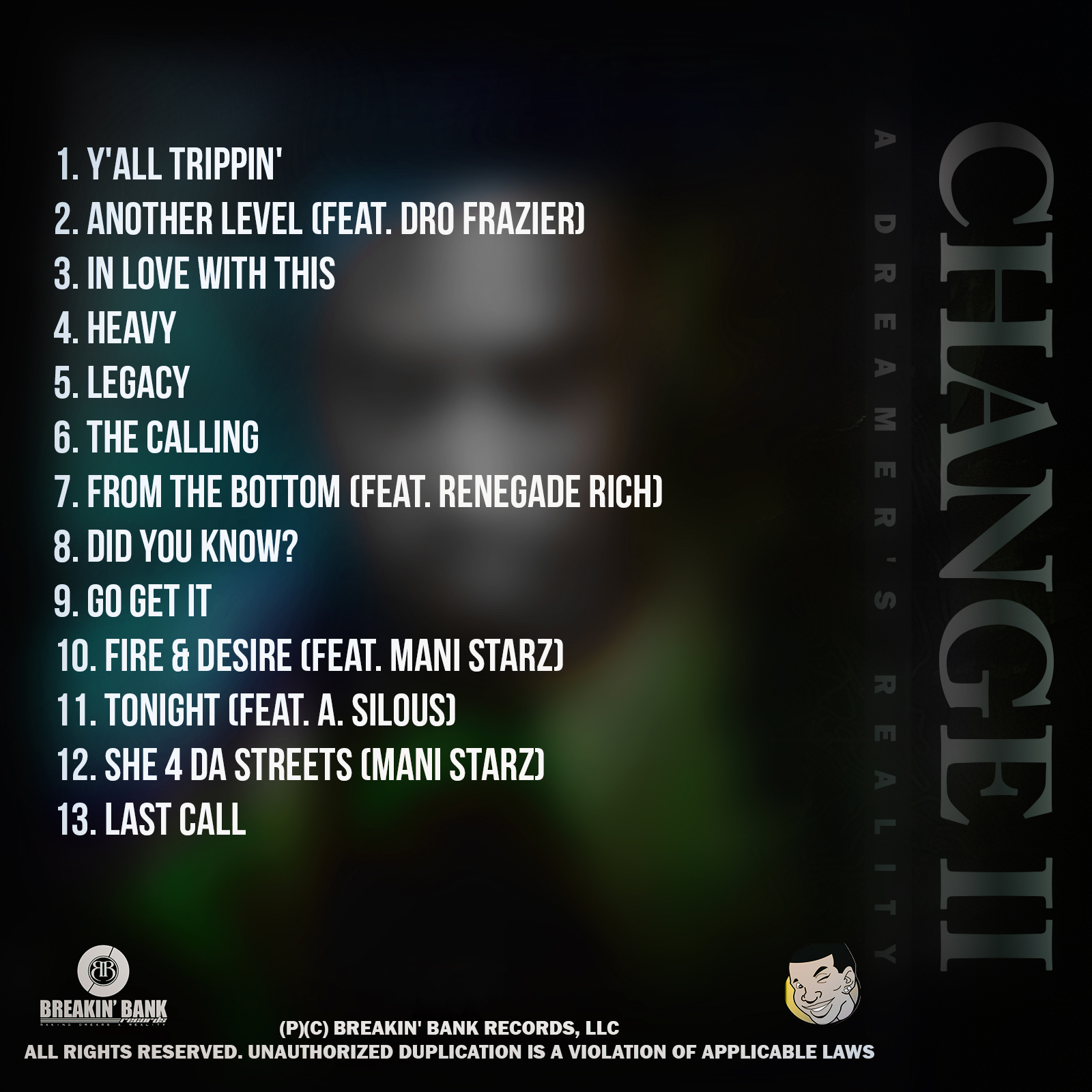 Y’all Trippin’ sets the album off letting everyone know what Bank will and will not tolerate in the streets and industry. He’s not for any drama, doesn’t live for likes and comments, and won’t let people close to him. His mission is full throttle go mode.  Another Level defines Bank and his stance. While others are watching…all eyes on him…he’s not distracted and continues to elevate his shine. In Love With This serves as a self-empowering track (each track is; however, this is a stand-out one). Bank is doing what he wants and living his most beautiful life. There’s no time to fake it, and no time to invite squares into his circle.  Bank used to watch from nosebleed sections and now he is talking to the front row, flying to milestones.

Although somber in deliverance, Heavy is a relatable track regardless of gender, age, or ethnicity. Bank shares how heavy his shoulders feel from carrying the world and being strong for everyone except for himself. “Part two to sick and tired”,  he’s experienced a past of close calls and now is ready for Jesus to take the wheel. Legacy is the flip side of Heavy as it touches on his grind, risk-taking, long nights, and sacrifices to ensure he leaves behind a legacy.  The Calling is the labor that goes into building the foundation of Bank’s legacy. It’s crucial to respect his artistry as a brand, “cooking up in the kitchen so every session is heated, what I sport is illustrated fresh when I demonstrate it.”

From The Bottom depicts Bank’s climb to success and follows suit of the motto “go hard or go home, the model still be the same.”  Unlike others, he’s found the key which allows him to lay his soul into all his verses.  Bank piggybacks that theme in Did You Know as he dictates the process of getting money and respect all while paying homage to his city. He’s got everything planned and mapped out, which is clear by his industry moves. Go Get It reflects on Bank’s agility to live through self-teachings. The recipe is simple, yet complex at the same time but the result ends in celebrated wins.

Watch the official video for Did You Know

Bank takes a brief intermission from his lyrical memoir to entice the ladies…In Fire & Desire, he asks the ladies to pull up, take a shot, and not overthink what comes next. Tonight sets the mood while Bank, wearing his heart on his sleeve, declares his intentions for the night and nights to come. Let him be your Superman. The blend of rhymes and R&B melodies in both tracks are sure to take listeners back to vulnerable, feel-good music. Bank flips the ‘me against the world’ vibe and calls out cheating women in She 4 Da Streets. It’s rare we hear tales of women breaking hearts and doing wrong, Bank epitomizes that experience and comes out on top knowing and respecting his worth.

Bank concludes the album with Last Call in which he drops jewel after jewel recapping his self-prophecies throughout the album. He’s never second-guessing in life, in the streets, or in the booth…If you didn’t know Byron Bank (shame on you), after listening to ‘Change II: A Dreamer’s Reality’ you will become more than familiar.

Overall, Byron Bank delivers an album brewing with intricate rhymes, catchy hooks, quotable punchlines, along with infectious melodies that accentuate both his raw emotion and inspiring lyrical autobiography. Not only does the album serve as a timeless gem, but the quality also suffices as a no skip track.

Connect with Byron Bank below

For his 3rd solo studio effort Casket D gifts us with “HEALER”. A poignant concept album filled with honesty, inspiration and tutelage. Casket delivers his expertise of life over soulful instrumentals flooded with heavy drums. The production flows beautifully throughout. The features are precise. His lyrics are sharp and crisp, confidence apparent, deliberately vulnerable yet wise beyond years and determined. At just under an hour (54 minutes) of listening time “HEALER” makes a strong case for not only the best to come from Casket D thus far, but arguably the absolute best in Hip-Hop this year.

Michael Carvalheiro, better known as CARV, is a 18-year-old singer/songwriter from Bradford, Ontario. Michael has been surrounded by music his entire life. His father plays in a band and also taught him to play the guitar. Michael’s passion for music was always present but was never really his priority. He began to look at music as a career at the beginning of the COVID-19 outbreak. He found himself with a surplus of free time and started experimenting on GarageBand. He recorded his first-ever demo using the app and instantly fell in love with the idea of recording music. Michael’s music tends to reach out to people who can relate to the messages conveyed through his lyrics as he often writes about very personal experiences.

His debut album, “In My Dreams”, is now available on all streaming platforms and is what he considers to be “his mind on paper”.

(Fun Fact: Did you know that CARV’s first two singles, “April Showers”, and “Laying in the Snow”, were completely recorded and produced using GarageBand on his phone? He sang straight into his phone to record his voice!)

Be sure to check out Carv’s Debut Album In ‘My Dreams’ Out Now On All Platforms! Stream it below Off Spotify & Be on the lookout for his new music!